Surface magnetic skyrmions (topologically protected magnetic whirls) are particularly promising elements of the next generation of high-density magnetic storage and magnetic logic devices. Researchers of the University of Hamburg, in collaboration with members of the Computational Magnetism research group of the Department of Theoretical Physics at BME, proposed a new method of stabilizing magnetic skyrmions, and published their results in Nature Communications. The atomic thin film Fe2/Ir(111) under investigation has a spin spiral ground state with a period of 1.2 nm and shows no formation of magnetic skyrmions in magnetic fields under laboratory conditions. Upon adsorption of hydrogen, a spin spiral ground state with a period of 3.5 nm was observed, from which stable magnetic skyrmions have been formed in the presence of an external magnetic field of 3 T, as shown by spin-polarized scanning tunneling microscopy (SP-STM) images. Former members of our institute, Levente Rózsa (presently staying in Hamburg with a Humboldt fellowship) and Krisztián Palotás (Slovak Academy of Sciences, Bratislava), as well as current coworkers of our institute, László Udvardi and László Szunyogh, participated in the research, and in terms of ab initio calculations and spin dynamics simulations revealed that the observed modulation of the magnetic ground state of the Fe layer upon hydrogen adsorption can be associated unambiguously with changes in the geometric and electronic structure of the system.

Below: SP-STM images showing the formation of magnetic skyrmions in the ultrathin film Fe2/Ir(111) due to adsorption of hydrogen and magnetic field. 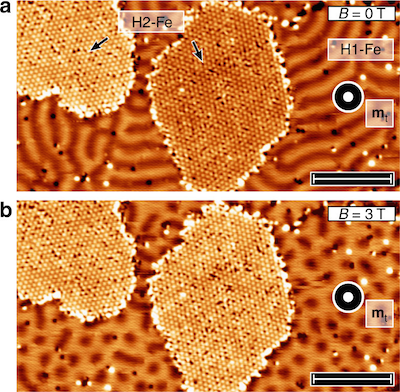