Professor of our Institute of Physics is recognized by a shared Academy Prize for his outstanding scientific contributions by the Hungarian Academy of Sciences.

Announcement on the website of the Academy, in Hungarian:

Péter Vankó, associate professor of the Department of Physics, receives the Best Teacher Award of BME in 2019 Fall semester. Interview (in Hungarian) in the student's magazine Műhely.

BME physicists find an unexpectedly large extension of the Yu-Shiba-Rusinov (YSR) state in a superconducting nanostructure, a result which paves the way toward topologically protected qubits. The work is published in Nature Communications, in collaboration with colleagues University of Basel.

Recent years have bought new quantum bit proposals, which are based on low-energy bound states in superconducting environment. These qubits would combine the properties of spin-based and superconductor-based qubits, and they are robust against noise-induced information loss. One such qubit is based on the so-called Yu-Shiba-Rusinov (YSR) state: a linear chain, engineered from such bound states, could host noise-protected quantum states. Due to the very small spatial extension of these states, making two of them interact with one another is difficult. Up to now, this was only possible by a very delicate technique, where individual ferromagnetic atoms are deposited next to each other.

In their new study, the MTA-BME Momentum Nanoelectronics Research Group realizated the YSR state in an alternative way: they attached an artificial atom to the superconductor's surface. This is the first time that the spatial extension of such a YSR state is measured. The measurement brought a surprising result: The size of the YSR state reaches 50-200 nanometers, which is significantly larger than the spatial extension observed in the case of real, ferromagnetic atoms. With state-of-the-art nanotechnology, artificial atoms can be routinely fabricated at such distances, which paves the way to realize YSR chains. The large extension of the YSR state has been theoretically explained in collaboration with another research group of BME’s Institute of Physics, the BME-MTA Exotic Quantum Phases Momentum Group. 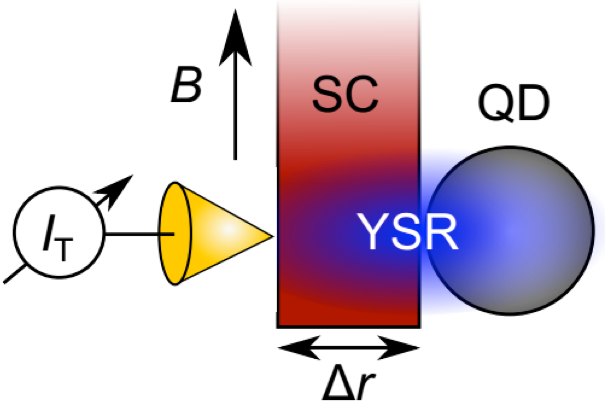 Single-atom-sized wires carry the electric current in the memristors created by our colleagues in the Nanoelectronics research group. Research published in Nano Letters.

An exciting special lecture in physics, with spectacular experiments, for high-school students and teachers, at the BME Institute of Physics: Jan 28 Tuesday, 15:00.

Link:
http://jedlik.phy.bme.hu/experiments/
Our colleagues in a collaboration with researchers from Bilkent University showed the formation of periodic patterns by a diffusion–precipitation reaction in a stretchable hydrogel and the control of the obtained patterns by the unprecedented and uncommon method of mechanical input. The study has been published in Advanced Materials.

Outreach talk series `Science Campus' for high-school students hosted János Asbóth's talk on the basics of quantum computing and the most recent experimental breakthroughs of field.

The Open Day of the BME Faculty of Sciences takes place on Friday, November 15.