Popular article on the high-frequency electrodynamics of superconductors, published in "Fizikai Szemle", from members of the Spintronics and Spin Spectroscopy Research Group.
The research group: https://dept.physics.bme.hu/SpinSpectroscopy
2021 May issue of "Fizikai Szemle" (in Hungarian): http://fizikaiszemle.hu/szemle/93
Article (pdf, in Hungarian): http://fizikaiszemle.hu/uploads/2021/05/fizszem-202105-csosz-simon_13_14...

New Vorbuchner helium liquifier, recycling helium for several research and educational laboratories within and outside BME, have been installed succesfully in building L.

Images at the Department of Physics.

Detailed description of the project in Hungarian.

Our colleagues' new results may enable the creation and experimental investigation of topologically protected quantum states. Published in Nature Communications.

A new step towards quantum technology: novel quantum states at superconducting surfaces induced by magnetic nanostructures
Fabrication of hybrid magnet-superconductor systems at the atomic scale opens the way for new types of applications in quantum technology. Near magnetic impurities embedded in superconductors, so-called Yu-Shiba-Rusinov (YSR) states arise, forming the building blocks of topological quantum states in nanomagnet-superconductor systems. In collaboration with an experimental research group of the Hamburg University, researchers of our University, Krisztián Palotás, András Lászlóffy and László Szunyogh, as well as Levente Rózsa (Konstanz University), a former student of the BME, successfully contributed to the theoretical understanding of the YSR states induced by manganese adatoms placed on the surface of superconducting niobium. Their recent study focused on the investigation of the YSR states of ferromagnetically (FM) and antiferromagnetically (AFM) coupled manganese dimers and, for the first time, it was experimentally shown that the atomic YSR states are split not only for the FM-coupled, but also for the AFM-coupled dimers. In former studies it was concluded that the presence of split YSR states excludes AFM-coupling in the magnetic dimers. In view of the present discovery these experiments should be revisited. Theoretical considerations and numerical simulations uniquely confirm that the observed splitting of the YSR states in the AFM-coupled dimers is the consequence of the interaction between the electrons’ spin and orbital moments, referred to as the spin-orbit coupling, in combination with the missing inversion symmetry at the surface. The results presented in Nature Communications (Nature Communications 12, 2040 (2021)) put forward the possibility of forming YSR bands in AFM-coupled chains, opening a new way of realizing qubits for topological quantum computing. 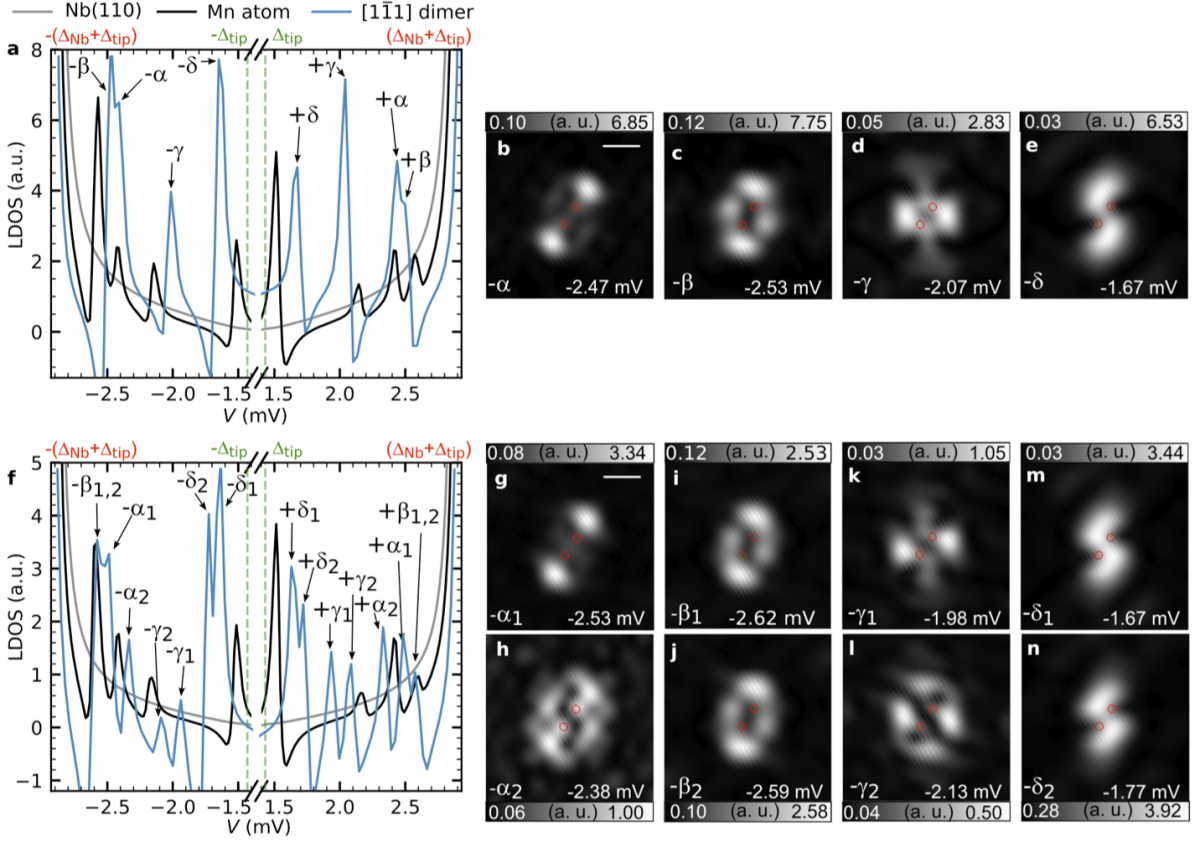 Webpage of the event: https://physics.bme.hu/dqs2021?language=en

Must-see physics experiments - online physics lecture for high-school students and their teachers, via the YouTube channel of Károly Härtlein, on Jan 22, 16:00.

Study on the natural geometry of fragmentation, by our colleague János Török and his coauthors, is selected by Science as one of their 10 favorite science news stories in 2020.

We mourn the tragic loss of our colleague Dr. János Pipek, honorary professor of our Institute, former Dean and Vice Dean of Education of the BME Faculty of Sciences.